Back to field trips 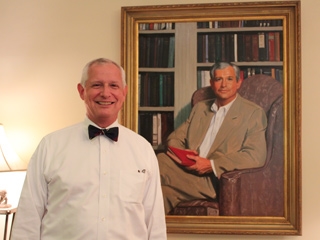 This is all Sue’s fault. She always has had an interest in having portraits painted of the children and of her and of me, but we never had the money when the children were little and then they grew out of the cute stage and it became even more unlikely we would have a separate painting of each child. So we took pictures.

Sue remembered Gian Cassone at the Richland Mall when she was young. He was the portrait artist who sat at the bottom of the escalator and painted people who would sit for him. I recently came across an interview with a well-known local artist who said he met Gian Cassone in the mall painting portraits one day and he went every day to watch him. Gian finally noticed him and taught him everything he knew.

Gian eventually moved to Haiti and owned a house on the beach and rarely returned to the United States.

But return he did. One of my cousins somehow met Gian and she befriended him. He did not have anywhere to live so he lived in her home and painted her children and painted her husband and painted her. She decided to drum up business for him, probably so Gian could pay her cash for a change. She spoke to Sue about hiring Gian for a portrait and Sue decided to have my portrait painted. I should have had the presence of mind to insist he paint her instead, but I did not.

My cousin assured Sue the painting would be a good deal for us. When Gian came over to take pictures of me and to discuss the painting, he gave us a price. My cousin told us that price was a third or even a fourth of his regular fee, but who knows how much he really charged? All I knew was Gian was living for free and he needed work. I really should have talked Sue into the portrait instead of me.

I never in my life have worn a suit without a tie but Gian had me changing clothes to get the best look for my portrait. I ended up wearing a tan suit with no tie. He put me in a chair in front of a bookcase and he handed me a book to hold. He took pictures and we talked.

Gian had his painting supplies set up in my cousin’s kitchen. According to the opinion of another cousin who stopped by the day Gian started on my canvas, Gian had my likeness from his first pencil strokes. He also noted that not on my best day have I looked that good.

I no longer remember what dimensions we discussed for the painting but I am positive I did not contract for a full-size painting. I could have stepped out of that canvas. As soon as Gian pulled it out of the car I thought, oh, my, that is big. I asked Gian about the size and he said it just needed to be that big. He charged me the same price we agreed; he just painted it a size that suited him.

So it hangs in my living room today. Sue will not let me take it to the storage unit where it belongs. Can you imagine my four children dividing the house one day? “You take it, no, you take it.” In a division of assets, I can see that portrait sitting in the pile with a few really good things.

Gian was 80 years old in 2009 when he painted my portrait. I heard from my cousin that Gian died earlier in 2013 in Haiti.